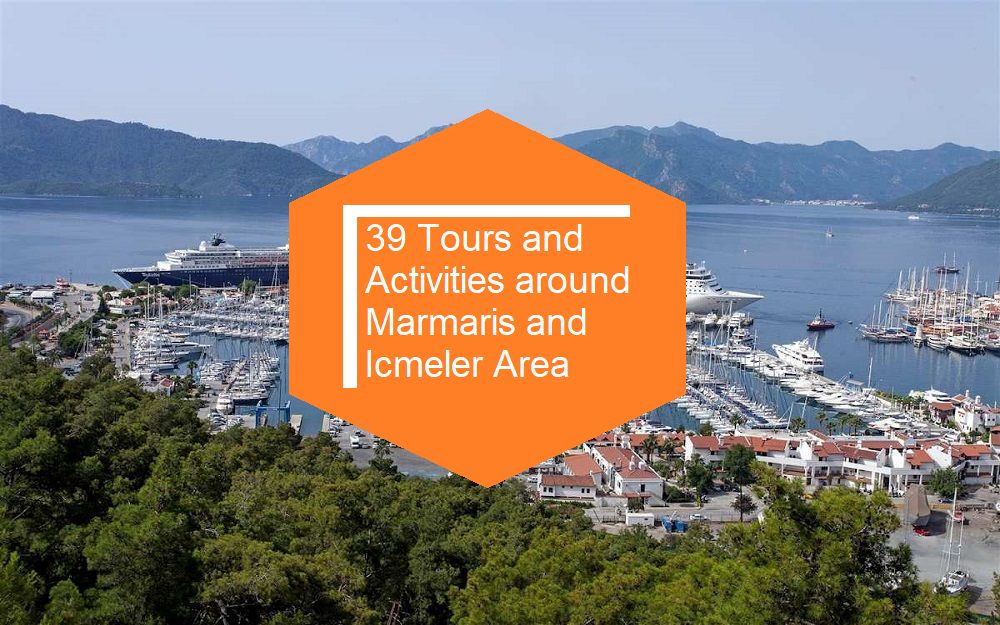 The town of Marmaris is located at the meeting place of the Aegean Sea and the Mediterranean Sea. Marmaris is one of the largest natural harbors in the world surrounded by pine-clad hills.

Situated in the south-west of Turkey, in Mugla province, Marmaris is one of Turkey's biggest holiday resorts. To the north lies the Gulf of Gökova; to the south, the Mediterranean. Datca Peninsula falls to the western side and to the east is the Lake of Köycegiz. The hills running into the sea and the beautiful bays make Marmaris the jewel she is. Many foreigners, especially Scandinavian nationals, have bought properties in and around Marmaris for their holidays or for the retirement.

The town is 60 kilometers from the provincial capital of Mugla and the mountainous nature of the surrounding countryside means that forestry plays an important part in the area's economy. The town boundaries are enclosed by 65,000 hectares of forest area.

History
It is not known for certain when Marmaris was founded. However, as Marmaris previously known as Physkos, was part of the Carian Empire in the 6th century BC before she was overrun by the Lydians. Another invasion by the Lydians in 334 BC led to the partition of the Roman Empire ruled by Alexander the Great.

According to the historian Heredotus, the Carians coming from Crete, settled in the area which is now known as the province of Mugla. They also took over the town of Physkos with its natural harbor and used it as a military base and to enhance trade between Rhodes and the other Aegean Islands. The Carian civilization entered a dark period after 300 BC, coming under the reign of the Egyptians, Assyrians, Ionians, and Dorians successively. The Dorians colonized the Carian province and divided the region into 9 cities, two of which were Halicarnassos and Cnidos. These two cities later on became an active trade centre and seaport of Anatolia specializing in handicrafts.

In 138 BC Attalos the 3rd King of Pergamon, whose predecessors had ruled Caria for 90 years, ceded Physkos to Rome and the city was ruled from Rhodes by Roman generals. The city became part of the Ottoman Empire in 1425, and the castle was built in 1521 AD for use in a planned assault upon Rhodes. The Ottoman Sultan at the time, Kanuni Sultan Süleyman, changed the name of the town to Mimaras, which then became Marmaris according to historian Evliya Celebi.

A local rumor has it that the reason for the change of name to Mimaras was that Süleyman, on returning from his expedition to Rhodes, disliked the castle and said "Mimar as!", which means "Hang the architect!". Unfortunately there is no evidence to support this amusing story.

Castle
According to the historian Herodotus, there has been a castle in Marmaris since 3000 BC. During the Hellenistic Age Caria was invaded by Alexander the Great and the castle was besieged. The 600 inhabitants of the town realized that they had no chance against the invading army and burned their valuables in the castle before escaping to the hills with their women and children. The invaders knowing the strategic value of the castle, repaired the destroyed sections to house a few hundred soldiers before the main army returned home.

The 17th century writer Evliya Celebi mentions the castle, which was rebuilt by Kanuni Sultan Süleyman in 1522 when he invaded Rhodes.

Since 1979, renovation work has been continuing at the castle, in order to restore it back to original condition. Under the auspices of the Ministry of Culture, the castle has been converted into a museum. There are seven galleries, of which the largest is being used as an exhibition hall and the courtyard is decorated with seasonal flowers.