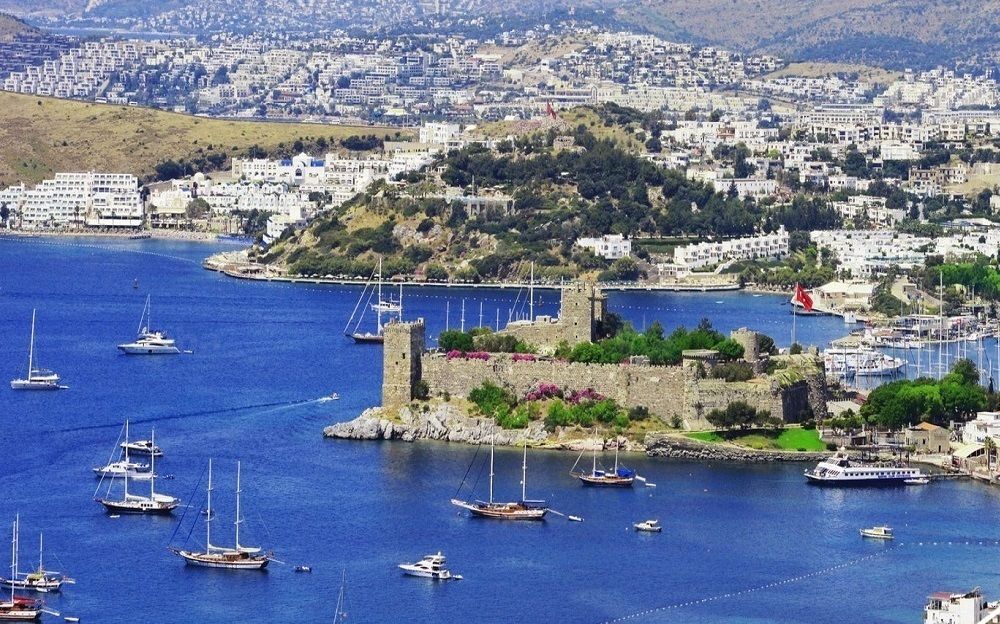 An impressive medieval castle built by the Knights of Rhodes guards the entrance to Bodrum's dazzling blue bay, in which the Aegean and the Mediterranean Seas meet. The town's charm is well-known, attracting a diverse population of vacationers who stroll along its long palm-lined waterfront, while elegant yachts crowd the marina.

Not far from town, you can swim in absolutely clear, tideless, warm seas. Underwater divers, especially, will want to explore the numerous reefs, caves and majestic rock formations. The waters offer up multicolored sponges of all shapes and sizes, octopi and an immense variety of other aquatic life.

The reputation of Bodrum's boatyards dates back to ancient times, and today, craftsmen still build the traditional yachts: the Tirhandil with a pointed bow and stern, and the Gullets with a broad beam and rounded stern. The latter, especially, are used on excursions and pleasure trips, and in the annual October Cup Race.

GulletBodrum has gained the reputation as the center of the Turkish art community with its lively, friendly and Bohemian atmosphere and many small galleries. This community has encouraged an informal day-time life style and a night-time of excitement. The evenings in Bodrum are for sitting idly in one of the many restaurants, dining on fresh seafood and other Aegean specialties. Afterwards night clubs (some with cabaret) and superb discos keep you going until dawn. Lately, many foreigners have bought (and continue to buy) property in and around Bodrum for their holidays or for the retirement. It became a popular area especially for the British nationals.

Bodrum, known in the ancient times as Halicarnassus which was the capital of Caria, was the birthplace of Herodotus and the site of King Mausolous' Tomb (4th century B.C.), one of the Seven Wonders of the Ancient World. In the harbor, the Bodrum Castle, or the medieval castle of St. Peter, is a fine example of 15th century crusader architecture, and has been converted into the Museum of Underwater Archeology, with remains dating as far back as the Bronze Age. The stunning panoramic view from Goktepe, nearby, is much photographed by visitors to the Museums' 2nd century theater.

The beautiful Bodrum Peninsula suits holidaymakers interested in a subdued and relaxing atmosphere. Enchanting villages, with guest-houses and small hotels on quiet bays, dot the peninsula. On the southern coast, Bardakci, Gümbet, Bitez, Ortakent, Karaincir, Bagla and Akyarlar have fine, sandy beaches. Campers and wind-surfers enjoy Gümbet, and at Bitez colorful sail boards weave skillfully among the masts of yachts in the bay. On shore you can enjoy quiet walks through the orange and tangerine groves bordering the beach. Ortakent has one of the longest stretches of sandy beach in the area and offers an ideal place for relaxing in solitude. One of the most beautiful beaches on the Bodrum peninsula, Karaincir, is ideal for lively active days by the sea and relaxed, leisurely evenings with local villagers. Finally, Akyarlar enjoys a well-deserved reputation for the fine, powdery sand of its beach, it's also considered as one of the best beaches in the world. Turgutreis, Gumusluk and Yalikavak, all with excellent beaches, lie on the western side of the peninsula and are ideal for swimming, sunbathing and water sports. In Turgutreis, the birthplace of a great Turkish Ottoman admiral of the same name, you will find a monument honoring him. In the ancient port of Myndos, Gümüslük, you can easily make many friends with the hospitable and out-going local population. In Yalikavak white-washed houses with cascading Bougainville line narrow streets. Small cafes and the occasional windmill create a picturesque setting.

Mausoleum of HalicarnassusSee the north coast of the peninsula - Torba, Türkbükü, Gölköy and Gündogan - by road or, even better, hire a boat and crew to explore the quiet coves, citrus groves and wooded islands. Little windmills which still provide the energy to grind grain crown hills covered with olive trees. Torba, a modern village with holiday villas and a nice marina is located 8 km north of Bodrum. Gölköy and Türkbükü are small and simple fishing villages with a handful of taverns overlooking a lovely bay.
After a boat trip to Karaada, half an hour from Bodrum, you can bathe in the grotto where the warm mineral waters flowing out of the rocks are believed to beautify the complexion.

The translucent and deep waters of the Gulf of Gökova, on the southern shore of the Bodrum peninsula vary from the darkest blue to the palest turquoise, and the coastline is thickly wooded with every hue of green. In the evening, the sea reflects the mountains silhouetted against the setting sun, and at night it shimmers with phosphorescence. You can take a yacht tour or hire a boat from Bodrum for a two, three or seven day tour of the gulf.

Also Milas town and Labranda, some 65 kms from Bodrum, are places of interest for archaeology lovers.