Home > Excursions > Side > Side & Alanya Area 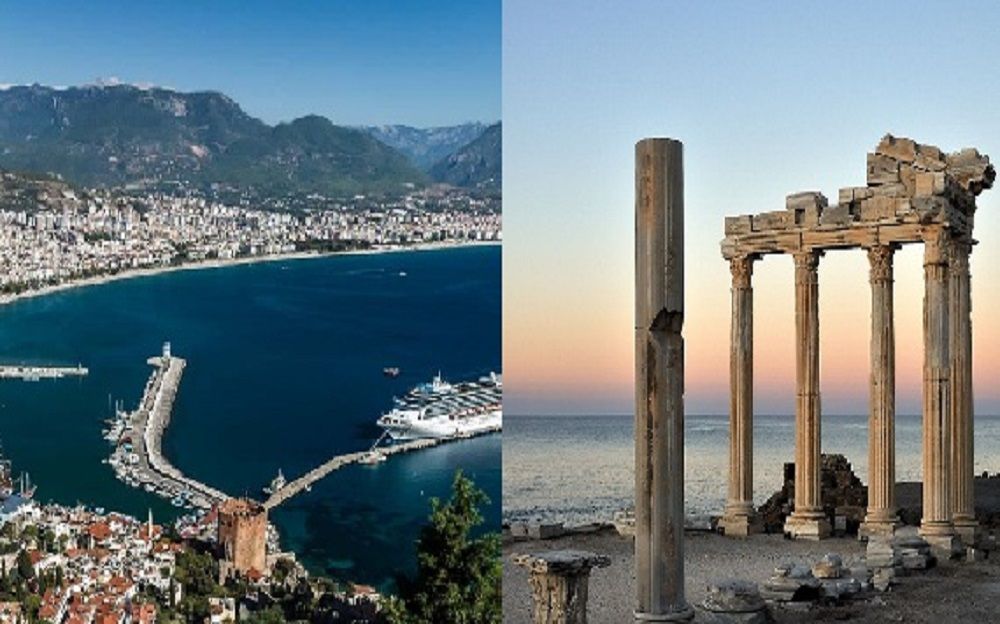 Side town was one of the ancient ports of Pamphylia on the Mediterranean Sea, located on a tiny peninsula about 80 kilometers (50 miles) east of Antalya. The word "side" in local Anatolian language meant "pomegranate". Some historians say that the city was settled around 7th century BC and than came under the rule of the Lydians, Persian, Alexander The Great's, Seleucid Empires, Pergamon Kingdom, Romans, Byzantines, and Turks respectively.

Side minted its own coins during the 5th century BC, a sign of strength and richness at that time. In the 4th century BC Alexander the Great captured the city without any fight, this was a peaceful period for whole region. In 190 BC, Side has allied with Antiochus III, king of Syria, and his commander Carthaginian Hannibal to fight against the Rhodian fleet, but they lost the naval battle and the city was occupied. In the 2nd century BC Side became a rich and prosperous city of Pamphylia again thanks to its location and the trade, actually it was a intellectual and cultural center too. In the 1st century BC Side was controlled by pirates and turned into a slave market, but with the arrival of the Romans these pirates had to leave. During the Roman rule, Side lived once more its heydays with its large harbor, trade between Anatolia and other ports of the Mediterranean, its important slave trading market and so on. Under the Byzantine rule, it was an important a Bishop center as well. Arab raids in the 7th century AD destroyed Side and its inhabitants abandoned the city. Side was not a settlement during the Seljuk or Ottoman periods.

Today excavations and studies show that Side was a very important city in the Mediterranean for several centuries. It was surrounded on all four sides by high walls to protect the city from both land and sea. The main gate of the city was built during the Hellenistic period to the east and it was protected by two towers. There were two main streets in the city, with columned porticos and shops behind them.

The Nymphaeum, a large monumental fountain, was built just outside the city wall and opposite the main gate. It had a large pool with ornamented niches, from which the water was flowing out. The city had also a perfect sewage system with terracotta pipes and vaults under the streets.

The square shaped (100 x 100 meters or 330 x 330 feet) Agora, the market place, is surrounded by porticos on four sides with shops under. It's located opposite the museum today. On the south-west corner of the Agora adjacent to the theater, there was a public toilet with a capacity of 24 people, one of the best examples of Roman latrines. A circular temple in the middle of Agora was dedicated to Tyche, god of Fortune. This Commercial Agora was connected to another square-shaped but smaller agora which was called as State Agora and used both for state affairs and slave trade. There was also a Gymnasium surrounded by porticos and composed of three halls, just to the south side of the Agora.

Theater of SideThe theater is a unique example in Anatolia because of its plan and construction type, and is one of the best preserved ancient theaters in the world. It was built in the 2nd century AD on arches instead of a slope like in other Roman theaters elsewhere. It was formed by three sections: orchestra, scene, and cavea with a capacity of 20 thousand spectators approximately so this made it Pamphylia's largest theater. Besides regular performances, also gladiator and animal fights were organized in the theater. During the early Byzantine period it was used as an open-air church too by local Christians.

Side has great temples from the Roman period. Especially two of them are located by the sea near the harbor; one was dedicated to Athena and other one to Apollo. They were entirely built of marble in peripteros plan with Corinthian style capitals. In the 5th century AD a large Christian basilica was built in front of these temples, which were destroyed during the Arab raids in Asia Minor around the 7th century. Restoration of the temples are still being carried out. Another important temple, dedicated to the god Men (god of moon), was built by the end of the 2nd century AD to the east of the arcaded street. It has a semicircular base with Corinthian column capitals. And finally another temple, probably belonging to Dionysus, was built between the arcaded street and the theater.

There are also big cemeteries (Necropolis) outside of the walls and aqueducts used to bring water to the city from about 25 kilometers (15 miles) away. Side has been excavated by archaeologists since 1947 and excavations continue also in present day.

Today, Side is a major tourist resort with its sandy beaches and great hotels. It offers history, sea and sun vacation, and many water sports activities. Nearby Aspendos theater and Perge site, Manavgat river, and the city of Antalya are easily reached if you're based in Side.

Side Museum
A huge Roman baths next to the theater is turned into a museum today. Originally the building was built in the 5th century AD and restored in 1960, than opened as a museum. The structure is formed by 5 rooms entered through two arched doorways. The first room was the frigidarium, coldest section of the baths. From here, there is a connection to the sweating room. The third and the largest room in the complex is known as caldarium, hottest section of the baths where the heating system was passing underneath its marble floor. After this, there was a tepidarium or washing area formed by two rooms. There was also a palaestra in front of the baths for physical exercises.

Side Museum hosts most beautiful archeological pieces collected from the region in its halls, all the statues found during excavations between 1947 and 1967 have been removed here. The museum has collections from the Hellenistic, Roman and Byzantine periods; inscriptions, statues, friezes, amphorae, altars, tombs and tomb stalls, columns and capitals, etc.

Red Tower in AlanyaAlanya town is located about 100 kilometers (65 miles) to the east of Antalya, on a peninsula between the Mediterranean Sea in the south and the Taurus Mountains in the north. It's one of the most popular holiday destinations of Turkey today especially for Sun - Sea - Sand lovers. It has many beaches with a blue flag, awarded by a non profit organisation "Foundation for Environmental Education" (FEE), and many hotels and resorts along the coast on sandy beaches. Therefore, every year millions of tourists choose Alanya for their holidays. Most of the foreign visitors to the town are from Germany, Holland, Scandinavia, and Russia. Lately, many foreigners have bought (and continue to buy) property in and around Alanya for their holidays or for the retirement. It became a popular area especially for the German nationals.

Historicaly, the town stood between Cilicia and Pamphylia regions in the south. The first foundations are not quite known but during the excavations in several caves nearby, it's discovered that the area was inhabited since the Paleolitic ages. Around the 4th century BC, the city was known as Coracesium. The Seleucids tried to capture it but failed. Later on it became the center of piracy in the Mediterranean especially during the reign of the rebel Diodotus Tryphon. Roman general Pompey the Great captured the city in 65 BC, putting an end to the pirates' rule. During the Roman period, the city prospered and minted its own coins in the 2nd century AD, which was a sign of richness and prosperity at that time.

After the collapse of the Roman Empire, the Byzantines ruled the city. They called it as Kalonorosa, meaning "beautiful mountain". There aren't much details from the Byzantine period but it must have been a Christian city like the rest of Cilicia and Pamphylia. During the Medieval ages the city was know with different names; Candelor, Scandelore or Galenorum, named by the Genovese, Venetians, and the Cypriots.

Around 11th and 12th centuries the city changed hands between the Seljuk Turks, Byzantine ruler Alexios I Komnenos, First Crusade, and the Armenian ruler Kyr Vard. Finally, it was captured in 1221 by the Seljuk Sultan Alaaddin Keykubat who gave his name to the city and called it as Alaiye. During this time, the town lived its hay-days again. Major construction and repair projects were carried out buy the sultans, making the city an important trade port for western Mediterranean.

After the fall of Seljuks, the city was captured by Karamanlids and other Anatolian principalities, as well as by Lusignan kings from Cyprus and then Egyptians. During the Ottoman rule after 15th century, the city lost its importance. It's said that Atatürk called the town as Alanya instead of Alaiye in 1933, so that became the modern name of the city.

Alanya is one of the best preserved Seljuk cities today. It has many ancient sites, monuments, and caves, as well as natural beauties.

Alanya Fortress
The fortress is built on a hilltop and surrounded by a 6,5 km (4 mi) long wall, equipped with 140 towers and about 400 cisterns. In the highest section, which is the western part of the hill, the fortress reaches at 250 meters (820 feet) above sea level. Eastern section of its wall is going down the hill all the way to the sea, until it reaches the Red Tower. The castle as we see it today was built in the 13th century by the Seljuk sultan Alaaddin Keykubat, but its foundations are dating back to the Hellenistic period. There were arched main gates with inscriptions on them and some smaller auxiliary gates, but many of them are damaged today. There are several old buildings inside the castle, such as brick cisterns, baths, and Byzantine churches. There is also a settlement inside. The road to the castle is open to traffic but very narrow, alternatively you can also walk to the top in about 1 hour. There are restaurants and cafeterias on the road along the sea side.

Kizil Kule (Red Tower)
The tower is one of the most prominent Seljuk monuments in Alanya. Located at the harbor, this 33 meters (108 feet) tall tower was built in the 13th century for the surveillance of the seaport and the dockyard. It became the symbol of Alanya today with its octagonal shape. There is a cistern in the middle of the tower, and you can reach to the top by big stone steps. Its name comes from the red bricks used in the costruction of its top, meanwhile the lower part was built with local stone. There are five floors in the tower, where the lowest floor is used for exhibitions.

Tersane (Shipyard)
Another fine example of the Seljuk period, the shipyard was again built by the Seljuk ruler Alaaddin Keykubat in the 13th century and located in the south of the Red Tower. The structure, measuring 56 x 44 meters (183 x 144 feet), has five arched and inter-connected galleries by the sea where big warships of the time were built. The shipyard also contains offices and a small mosque located on the left of the entrance. You can reach there with small boats from the sea, the entrance is free of charge. Today, the building is illuminated at night. There's also a gun house next to the shipyard standing on a rock, where cannons for battleships were made.

Damlatas Cave
The cave was discovered by accident in 1948 during the works for the construction of Alanya Harbor, and soon this natural beauty became one of the most popular attractions in the area because it's beleived that the air in the cave is beneficial to asthmatics. Thousands of years old stalagmites and stalactites attracts many visitors to the cave. The cave has a constant temperature of 22 degrees Celsius (around 72 Fahrenheit) and more than 90% of humidity. Damlatas Cave is about 30 meters (100 feet) deep and about 15 meters (50 feet) high. Other caves near Alanya are; Dim cave, Hasbahce cave, and Sea caves.